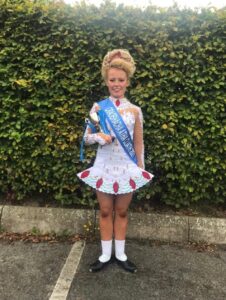 Congratulations to the girls who were competing at the Irish Dancing Dublin championships in Tyrrelstown recently. 6th Year student Jodie Sinnott won third place in the Under 21 category defeating around thirty other dancers at this age grade. There were three rounds, one in soft shoe and two in hard. Jodie dances with her mum’s dance school Louise Flood’s School of Dance based in Donabate.

“I’ve been dancing for as long as I can remember, I’d say since I was three!” Jodie told us when we asked her for how long she was dancing. She says “at times it’s hard to juggle school and dance”, but she practices twice a day and sometimes she has to get up early in the morning to do her homework if she has dancing after school. This was her first féis back after lockdown, an almost two year break not stopping Jodie’s passion for dance.

Her sister Carlie is following in her footsteps, and she placed second in the under thirteens at Tyrrelstown. Carlie has just joined DCC as a first year student. Ella Nolan, a TY student, also performed exceptionally well getting sixth place competing in the under fifteens.

We’re really proud of all our Irish dancing students and wish them the best in future competitions!

Thanks to Jodie for allowing us use the accompanying photo!