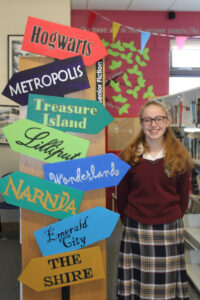 Massive congratulations to Second Year student Sophie Victoria Byrne who has been published by Fighting Words in a Global Writing Lockdown book entitled “Near and Far Are All the Same These Days”.

Sophie’s poem ‘Broken Mould’ was included in the publication which included work from eight other nations. The project was envisioned as a way of bringing everyone closer together even as we were forced to remain apart.

Thirty-nine writers in Ireland were included in the exciting initiative and we are so proud that Sophie is among them!
Very well done Sophie. You can read Sophie’s poem and the other pieces included in the anthology here!