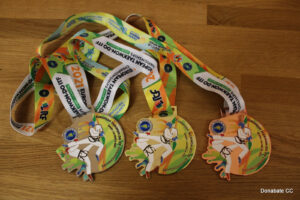 It has been a busy few months for the Leaving Certificate student but he is coping well balancing his study and his sport. “I think that training is a good way to escape from studying and it takes your mind off it, it’s good to keep fit and healthy. It’s just striking the balance is all.”

There’s no doubt that Finn has been training hard in laying the groundwork for these Championships. “There’s been tons of preparation gone into it; training in the club and with the national team on the weekends. I’ve been preparing the whole time for it. I’ve been training so hard like seven days a week, nonstop.” Finn commented. Before and after school and at the weekends, Finn’s dedication to his sport illustrates not only his inspiring dedication but also how much he enjoys the sport, as he admits himself; “I’ve been doing taekwondo for the past ten years; I love doing it.”

At the European Championships, Finn faced athletes from many different countries but it was a Slovenian named Ziga who he found the toughest during team sparring. In individual sparring, Finn defeated fellow Irish teammate Adam in the final.

This is not the first time Finn has represented Ireland at these Championships, he attended them back in 2019 and while he did not come home with medals on that occasion, he was fiercely determined to improve and come back stronger. Humble as ever, Finn reflects on his achievement in representing his country and standing on the top step of the podium; “It felt unbelievable, especially standing on the podium. It was really special and it’s great to do something for your country, something that you love doing too.”

Congratulations Finn and we wish you every success with your sport!