The Rise and Spread of Fake News

In an age where digital news is becoming increasingly widespread, fake news is something that anyone can fall victim to.  It can be deceptively dangerous, especially in the current uncertain times we are living in.  With people already living in fear of the unknown, fake news only makes these concerns worse.  Fake news has existed for years under different names, but this term became popular during the 2016 American Presidential Elections and has been blamed by some for the election of current US President Donald Trump.  The term itself has been used by people to mean a variety of things, but actual fake news is a story written to deliberately misinform the reader.  News stories can be incorrect for any number of reasons, but they are not considered fake news unless the author knew these things to be untrue.

Fake news has become a topical issue in recent years, but it has existed for centuries, becoming more commonplace after the invention of the printing press.  This allowed a huge increase in the number of people who could quickly share information, but with no journalistic standards requiring this information to be true.  An increase in fake news was seen again at the turn of the 19th century when the number of newspapers and magazines circulating skyrocketed due to printing press innovations and cheaper paper.  Competition became tough and editors needed to find a way to stand out from the crowd so they began to fabricate and make up stories so their paper would sell better.

We have begun to see a similar phenomenon happen with the upsurge in online news sites.  These sites make money solely from online advertising revenue, and in an increasingly saturated market, they need interesting headlines to get people to click on their articles.  To achieve this, they write articles with clickbait headlines and sensationalised news stories to increase engagement and profit.  And thus we see history repeat itself; a technological advancement allows more people to easily share news articles, the market becomes too congested, and people do whatever is necessary to stand out from the crowd.

Of course, making money isn’t the only reason people write and publish false stories; propaganda also falls under the category of fake news. This is where fake news can become dangerous.  When people form opinions about politicians or governments based on fake information, they can make poor decisions; decisions they would not have made if they had been better informed.  Fake news is also dangerous in times of emergency, such as the current coronavirus pandemic. 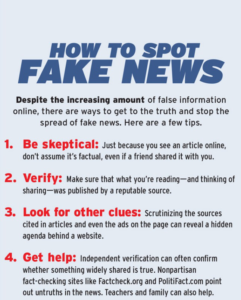 These are unprecedented times and therefore there isn’t a lot of information we know about the current situation and how it may progress.  Lack of information from reputable sources can cause people to turn to fake news outlets to fill the void, where they read stories that are exaggerated, sensationalised, or completely fabricated.  In a world that is facing a health emergency, fake news can be the difference between life and death.  False reports of impending lockdowns cause a flurry of panic buying and help to spread the coronavirus further.   Fake news has been said to be “just as dangerous” as the coronavirus itself by Dr Tedros Adhanom Ghebreyesus, Director General of the World Health Organisation.

It becomes especially dangerous when fake news is endorsed by those in positions of power.  Incumbent US President, Donald Trump, has repeatedly advocated fake news stories in press briefings about COVID-19.  According to CNN, he made 33 false claims about the pandemic in the first two weeks of March.   Negative consequences of such claims have already been seen after a man in Arizona died after taking chloroquine phosphate, which is in a drug that Trump falsely claimed had been FDA approved to treat COVID-19.

Even at its least destructive, fake news can create unnecessary fear and introduce a sense of panic into the general public.  This is why it is imperative that we do our best to prevent its spread.

Avoiding fake news in this day in age is nearly impossible.  However, knowing how to identify fake news can help stop it from spreading and causing damage.  News stories that have clickbait headlines rather than informative ones will often be found to contain fake news.  It is important to note however that not all articles with clickbait headlines will be untrue.  Be wary when reading stories about a popular topic, as reporters may have decided to follow trends rather than properly researching a story.  The easiest way to avoid misinformation is to get your news from a reputable news source.  If you are unsure whether or not the source is reputable, research the story to see if other sources confirm what it is saying.

Though fake news is on the rise, people are becoming more aware of its existence and the danger that it poses.  Reputable news sources such as BBC News have dedicated pages of their websites to addressing rumours popularised by fake news.  The Journal has created a tool-kit to help their readers to identify false stories.

While it has never before been so easy to fall victim to fake news, we are more equipped than ever to fight it.

Article with thanks to Ella O’Neill for TY Journalism.