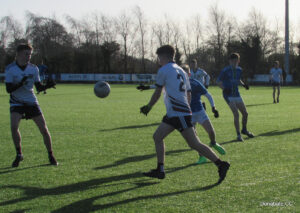 The first half got off to an exciting start with DCC’s Adam Conroy making the first score of the match. After the first ten minutes Donabate were up by 3 points but it’s safe to say it was a very tight match overall. Donabate made sure to secure a few more points leading 0-6 to 0-2 after the first twenty minutes with Tadgh McDonald, Brian Stenson and Kevin Burke all getting their names on the scoresheet.

The first half consisted of both teams fighting to push the ball out of their defence with Harry Stenson and Conor O Leary making excellent efforts of regaining possession. In the twenty-fifth minute Adam Conroy put DCC up by 1-06 to 0-2 by scoring a goal just before the halftime whistle.

At halftime DCC shuffled their pack with Jamie Neville coming on for James Freel, Jack Scott Lee coming on for Jack Gorman and Andy Caswell coming on for Callum Wright. Scoil Iosa made a better start scoring a goal in the first couple of minutes, but DCC recovered well pointing soon after. It was a thrilling yet nerve-wracking second half with Malahide making a fierce comeback.

With fifteen minutes remaining, it was level at 1-07 to 2-04, Brian Stenson put DCC up by one point, but unfortunately, Malahide never stopped pushing and finished stronger scoring four further points. In the last couple of minutes DCC converted a free kick, resulting in a two-point difference.

The team will now regroup and face Terenure College in the next round this coming Friday.