First Years through to the Leinster Champions League final 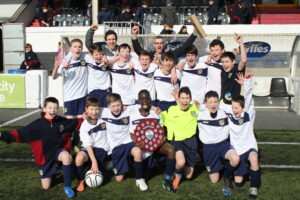 On a wet and windy day in the neutral venue of Lucan, Donabate CC met St. Paul’s CBS of Brunswick Street. Playing against the wind in the first half, Donabate went a goal behind after twenty minutes. The Donabate first years’ heads did not drop, however, and a superb solo effort from Niall Grant just before half time meant that the teams went in level at the break.

Donabate dominated possession in the second half and were unfortunate not to take the lead on several occasions. At the other end, Robert Rogers was also tested in goals and provided strong hands. Shetemi Ayetigbo put in another excellent performance, and dictated play from box to box.

The introduction of Calem Hales fifteen minutes from the end was a pivotal point in the match. St. Paul’s found it difficult to deal with his pace, and he was found several times with through balls from the midfield. After persistent pressure from Donabate, a fantastic passing move involving Calem and Neil Maddy was finished off by Harry Nugent. For the first time in the match, Donabate were ahead. Donabate hung on to record a 2-1 victory.

The Leinster Champions League final will be played after the Easter Break.

The Donabate Communty College first year boys’ soccer team reached the final of the North East Leinster league. In the final they faced Boyne Community School, the winner of this competition for the last two consecutive years. The final took place in Oriel Park, in front of the very enthusiastic first-year supporters of both schools.

After a dominant start, Donabate took the lead they deserved. Mark Madden floated a corner into the six-yard box. Boyne failed to deal with the cross, and under pressure, one of their players put the ball in his own net.  Boyne reacted well and put pressure on Donabate. Cian Shortle and Stephen Briody were strong in defence, and were supported by the whole team, with Mark Clarke making some important interceptions.

Boyne’s pressure paid off, and they got a penalty. Robert Rogers in net did enough to put the penalty taker off, and the shot went wide. Both teams had efforts go close. Jack Simpson and Harry Nugent attacked up the flanks, and were always reliant in their defensive duties.

At half-time, Donabate led by a single goal, and Boyne looked deflated, as they had been deprived of possession by a dominant Donabate midfield trio of Mark Madden, Shetemi Ayetigbo, and Christian Harris. Christian gave another disciplined performance linking play between defence, midfield and attack.

Mr.Clarke and Mr. Maddock made three substitutions at half time, and these substitutions resulted in Donabate converting possession into goals. Niall Shields joined the talented midfielders, and offered a confidence to Donabate’s ball keeping.

Neil Maddy and Niall Grant linked well with the midfield, and both came close with efforts. Donabate stayed firmly in control, and the rare Boyle efforts were confidently dealt with, and Stephen Murphy and Darren Maher played the ball out from the back.

After sustained pressure, Shetemi scored a second goal, much to the delight of the Donabate first-year fans. Calem Hales came on to rapturous applause, and helped Donabate keep the ball in midfield. Keyed on by a comfortable lead, and with the support of a sometimes deafening crowd, Donabate went searching for a third goal. They would get this through a now typical Mark Madden wonder strike. The travelling support, in the sun, watched Mark’s free-kick float over the keeper and into the top corner of the net.

The team remained structured and disciplined, and recorded a 3-0 victory. The supporters got what they deserved – they witnessed Donabate winning their first major soccer trophy.

The FAI representative praised both teams’ respect and fair play on the pitch, and commented on how well turned out the teams were. Donabate’s captain, and man of the match, Shetemi Ayetigbo, lifted the trophy and the team celebrated their victory with the rest of the first-year group.